David Conley – teacher, artist, author, and ‘apparently quite a nice guy’ (according to his Instagram page) – is the author of That Book About Greek Mythology. Perhaps you think you already know all the famous Greek tales? Maybe, but I’d be willing to bet you haven’t experienced them retold with the special spin and step-by-step illustrations produced by David Conley.

As a teacher, David Conley has been inspiring his colleagues for quite a while by providing ‘sketch-notes’ after ALEA professional learning workshops ~ essentially a retell of the main learning points during the session accompanied by his quirky cartoon illustrations. Now our students can also enjoy David’s unique perspective through his take on mythology, and perhaps also be inspired to put pen to paper as well. Sit back and enjoy the responses David Conley gave to our questions.

When did you start drawing? You must be talented to be able to illustrate your own books as well as write them.

According to my mum, I began drawing when I was 2 and the first thing I drew was a giraffe. With supportive people around me encouraging me to explore drawing in lots of different forms, I kept drawing and growing and trying new things. My inspirations in terms of illustration are Terry Denton, Chris Riddell, Graeme Base, Quentin Blake and Jeff Kinney.

Am I talented? No.

I illustrated for years before I realised the way I want to draw these characters is how I draw when I’m in a rush. Big eyes which are stuck together in the middle, big heads, squat bodies, hands that look like deflated jelly fish and feet which look like giant fingers.

The less detail I put in a picture the better. With less detail, the reader can’t be confused as to what the picture is saying.

I know that if I use lots of drawings, I don’t need adjectives.

I’ve always found that if a story is rich in imagery, the language often gets in the way if it’s too descriptive.

And what about writing? What got you into writing?

I decided to start writing when I was reading an Andy Griffiths book to my class and realised it looked like a lot of fun to craft your own stories. I knew it would be a lot of work but I wanted to try it as my new creative outlet. Since starting to write, I’ve developed a lot of new teaching strategies which consider the writing process from a writer’s perspective instead of a teacher’s perspective.

To figure out how to write my books, I had to go through about 5 years of writing in different styles to eliminate what I didn’t like and hone in on what I did like.

Somewhere on my hard drive is a 40,000 word novel about Zeus and his rise to power.

I gave up on it because I realised I was pushing my values on these mythological characters and getting in the way of the stories. What I really wanted was a book of short sharp stories that got to the point with maximum support for beginning readers. So I took every story, stripped it down to the bare bones and crafted it to fit my style of communication in the classroom.

Where do you get your inspiration and your ideas for your writing and illustrations?

Myths are a link to people who walked around millennia ago. They’re entertaining but they can also give you an idea of what these people thought about the world and each other.

I want kids of all ages to have a chance to connect with myths in the way I connected with them when I was a kid sitting in the back of Nowra Library 30 years ago.

What are your tips for children (and adults) who struggle with the blank page when they have to write something?

Draw! Don’t even think about what you’re drawing.

Just let the pencil slide around the page until something bubbles up from the scribbly mess and says hello.

Give your creation a name. Draw it a home. Draw it up some breakfast and then draw it an adventure. Your blank page is no more!

Why not put yourself in a story? How would you fare as Goldilocks when the three bears come home? Would you climb the giant beanstalk or would you chop it down and use it for firewood? If you were the troll living under the bridge, would you wait for the biggest billy goat gruff or would you snack on all three?

Why stop with just you? Let’s stick your whole class in the story! Drop an alien in your classroom and see who gets eaten first. Send your class to the bottom of the sea in a submarine and see who gets mistaken for a torpedo and shot into a battleship.

What was your process when writing That Book About Greek Mythology? 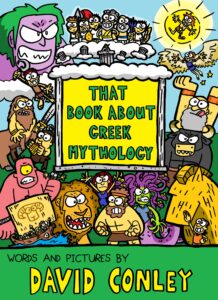 After hundreds of thousands of words and some advice from some kind and patient authors I found the voice I wanted to use to tell these stories and they came together in That Book About Greek Mythology.

Zeus. He never fails to serve his own interests with no consideration for anyone else. He’s selfish. He’s prone to temper tantrums. He falls in love with every pretty face he sees and he never suffers any consequences for any of his decisions. He always has someone else as his fall guy.

Zeus is just a super-powered toddler with a white beard and the power of the world’s most powerful weapon at his finger-tips. There’s nobody I’d rather write for. 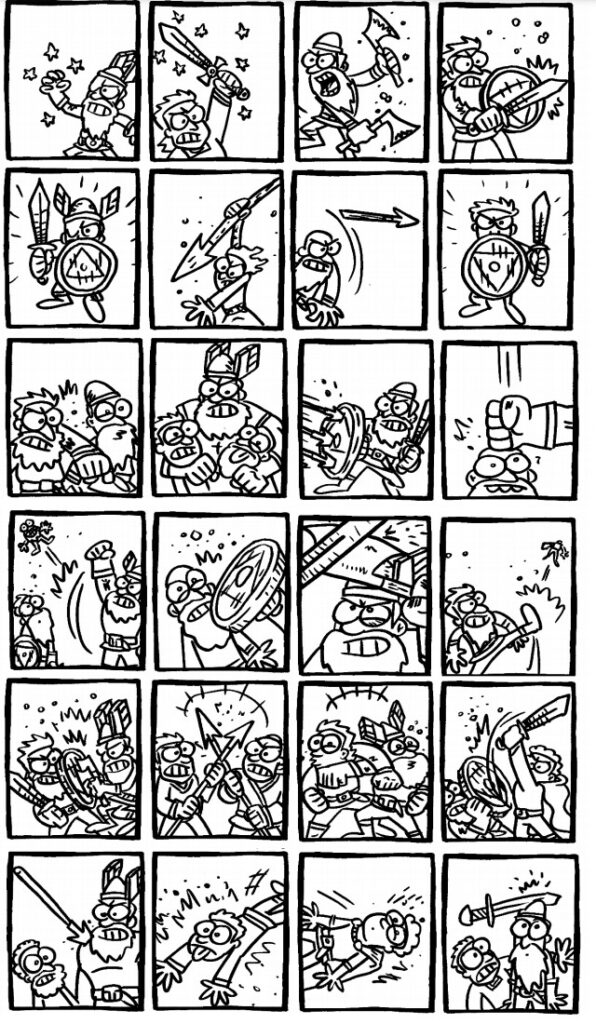 When you think about kids picking up your books to read, how does that make you feel?

First shock. Then bewilderment. Then I feel flattered.

A child’s extended attention is a huge compliment and it shouldn’t be taken lightly.

What do you want them to take away?

I want kids to enjoy their time in my book and feel a connection to the people that first shared these stories so long ago. I also want them to see how easy these books are to create! It’s just a bunch of words and pictures stuck together and pressed between two book covers.

I want kids to write because they’ve read the things I’ve written.

Author and illustrator David Conley has been teaching primary school children in Canberra and sharing the stories of Ancient Greece for 10 years and he’s not about to stop now. His new book, That Book About Norse Mythology should be out soon – once he can draw up and choose the book cover he hates the least!

Since David Conley began to create books, the bank of stories he wants to tell is steadily growing in his head and in his notebooks. Currently, he says there are five more books in him that haven’t found a way to come out yet.

You can find out more about David Conley, and check out his illustrations, on his Instagram page and can get in touch with him directly to ask about school visits via email: thatdavidconley@gmail.com

Everyone has moments when their mind goes blank as they stare at an empty sheet of paper. David offers some wonderful tips here to get past that block. Read about some more great tips from authors here.