Not Only About Wombats!

First things first. Australian author, Jackie French, describes herself as ‘a part-time honorary wombat’. If you follow her Facebook author page you will be treated to her daily videos and words about the wombat escapades in Jackie’s backyard. She has written several wombat stories and has studied over 400 of the creatures.

But, Jackie French is not only about wombats – she’s far more than that.

Jackie French is a historian, an ecologist, 2014-15 Australian Children’s Laureate and 2015 Senior Australian of the Year. Add on her 60-plus awards and more than 200 books for all ages (and her weekly column in The Canberra Times, which I love!) and you should be getting the picture.

All of this and Jackie French is still happy to answer questions about what makes her writing tick and the things that inspire her.

Sit back and enjoy her wit and her generosity of spirit. 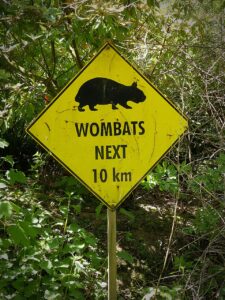 Where do you get your inspiration and ideas for your writing?

From music and walking. From the lives of people I’ve met on trains, or friends who live down the road, or people I met through their books or diaries or letters 100 or 2,500 years ago. And chocolate. (Not necessarily in that order). I also get inspiration from the land, of course. At least half of every book comes from the land around me.

It’s a bit like making compost. When you make compost you throw in anything you can find – dead dogs, old doormats, last night’s dinner. If you’ve made it properly, what comes out the other end is quite different – lovely, rich, fertile muck.

When you write stories you throw in everything you’ve ever known, but what comes out at the end is different from the original ingredients.

I love people’s stories, about the time the flood covered the valley for six weeks or when Ben Hall held up the gold coach just above our gate and the driver slipped over the edge of the mountain and ran down to get help. Everyone from the pub, where our guest cottage is now,  marched up the road, carrying spades and mattocks and the odd mug of beer. The bushrangers were gone when they got there.

I’ve never met anyone who didn’t have stories, though sometimes they think they aren’t interesting because they happened to themselves.

What are your tips for students when they’re facing a blank page and just don’t know what to write?

(Hold on tight for this one – some absolute gold here! JRW)

Inspiration can’t be poured out of a bottle like tomato sauce. But there are ten magic ways to shake your brain into story mode.

Football? Pizzas? Dinosaurs? Zombies? Your friends? All of those? Then write about a zombie dinosaur friend who loves football and makes the world’s best pizzas. Work out the best daydream you have ever had, the world you’d like to walk into now or see on TV … then write it.

It is easier to rewrite than get the first draft on paper.  I usually trash the first three days work of every book, but if I don’t write those first three days, the book won’t get to the stage where it begins to work. Write lots, and then be ruthless. When in doubt, just cut it out.

You have to THINK about your book to write the ending. You don’t need to stick to that ending. I almost never do. But if you don’t have your story in your mind before you write, you may never write a sentence, or you might get stuck half way down page one.

The first line of a story has to be strong enough to haul the reader into the story.

In The Girl from Snowy River, the opening line reads:

Today I met a ghost…

In Oracle, the first line begins: ‘The wind smelled of rock and ice, the night Nikko’s father took his sister out to die.

Don’t tell us. Show us. Lots. Your heroine is two metres tall and stroppy? Show her banging her head each time she encounters a new doorway or telling a brown snake to get out of the way. Then find at least 20 other fascinating things about her, and you’ll find she takes the story places you never expected.

Too much scenery is boring. Food is more fun.

In A Waltz for Matilda, it’s Christmas 1892. Twelve-year-old Matilda runs her father’s farm, with help from his eccentric shearer mates. There’s no money to buy a turkey, but there is a very large bird.

‘There’s good eating on a swan,’ Curry and Rice assured her. ‘Just put plenty of stuffing in it and it’ll be fine.’

Mrs Puddleham cooks stew for the rebel miners in The Night They Stormed Eureka and the hope and poverty of those weeks of rebellion is shown as she browns flour in lard to give each plateful the taste of meat the miners can’t afford to eat. 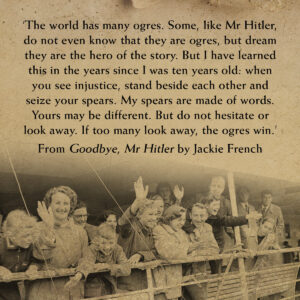 Tell the reader what your characters are eating. A tomato sandwich baked for two hours in a school bag on the veranda? A dripping icecream cone with a dusting of sand? A damper baked by the fire with the ash dusted off with a dried bullock’s tail? It will conjure up not just the time and place, but the characters too.

In Pennies for Hitler, a boy called Georg has lost his home, his family, even his name in World War Two. A wounded enemy collapses in front of him. Georg has a choice: he can kill an enemy, or he can save the man’s life.

Which does he choose? Which is more powerful,  hatred or kindness?

There’s a choice at the heart of almost every story.

What does the main character want? Will they find it in the end? Or will they want something entirely different by the time the story ends?

# 8 Give Part of your Heart

In The Last Dingo Summer, Sam whispers to his wife: ‘I know your name now. It’s Darling.’ as he slips into unconsciousness.

I won’t tell you when those words were said to me, but I cried when I wrote them. Your story has to matter to you. It can delight you. (Diary of a Wombat still makes me grin.) It can give you an escape, so even on the most boring day you can round up the brumbies on the mountain with Flinty McAlpine, or save a beloved man suffering shell shock as Midge does in A Rose for the Anzac Boys, or outrace a tsunami, like Niko in Oracle.

If the story doesn’t move you deeply, it won’t touch anyone else.

Sometimes you must offer up the parts of your own life that meant the most, to give true value to your readers.

The last line of a story must tempt the reader to imagine all the chapters that come next, but will never be written except in their imagination.

Clancy of the Overflow, the final in the Matilda series, is due out this November. But you’ll need to read the book to understand why I hope this sentence keeps you dreaming:

And the river slid between its sandbanks, never-ending, like the stories of Australia, as Matilda Rose McAlpine waltzed with Clancy of the Overflow.

Ask a friend or parent to listen to your ideas for a story and write them down for you. This works really well for essays, too. We can all talk. We can all say what we think. For some reason, many people think that writing needs a different style from talking. But it’s just the same, except with the ‘um’ and ‘ah’ and ‘well, I suppose it’s sort of like’ bits cut out.

If you can talk, you can write – you just need to believe you can do it.

Which of your books holds a special place in your heart, and why?

A Waltz for Matilda. The beginning of the nine-book saga about the land and people I love. Everyone I know, and every place, is in it. 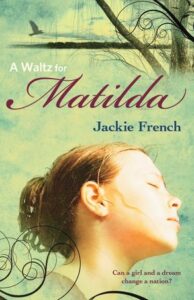 You can only choose one – which of your characters is your favourite, and why?

Ethel, who is in several books – but I won’t tell you which ones. I’d like Ethel for my best friend. Actually, Ethel is based on several of my best friends. They love her too.

When you think about children reading your books, how does this make you feel? What would you like their ‘take aways’ to be?

I hope you feel happy. I hope you escape into a fascinating world and when you come back here again you see this world a bit more clearly. I hope the books  help you choose and make a future that you love too. I hope you laugh a lot and want to share the bits you like most.

I hope you read my books with chilled watermelon or perfect pizza and leave many fingerprints on the pages so everyone who reads the book after you knows it’s been enjoyed.

I hope you make friends forever among the pages, just as the people in the books I read when I was your age have stayed my friends too.

And some final words from Jackie French for all of us to take away.

Fascinating ideas are more compelling than superb writing. On every best seller list there is a book so badly written it is embarrassing, but so fascinating you keep turning the page. Only a very few writers have managed to write books with images so tempting that they alone draw the reader on.

Read critically. Writing is a craft that can be absorbed, as well as taught.

Talent is more common than pigeons. Good writing needs determination. It can also be great fun.

And every time you think ‘I can’t do this’,  just add  one word.

I don’t know about you, but I could listen to Jackie French and soak up her wisdom for hours on end. If you haven’t had enough yet, have a look at her website where you can find out all sorts of interesting information, read her blogs, and see what she has to say about wombats. Even better, Jackie is now offering writing workshops via Zoom for both schools and small groups. Jackie French also has a comprehensive page for teachers on her site, as well as a bucket load of writing tips and information about her books. Enjoy!

At Just Right Words we’re passionate about promoting our locally-grown authors, illustrators and storytellers. Have a look at our ever-growing author/illustrator/storyteller pages here – there’s something to inspire everyone. And if you’d like to see your favourite book creator (or yourself) featured, contact me here and I’ll see what I can do. In the meantime – keep on writing and enjoying your literary journey.